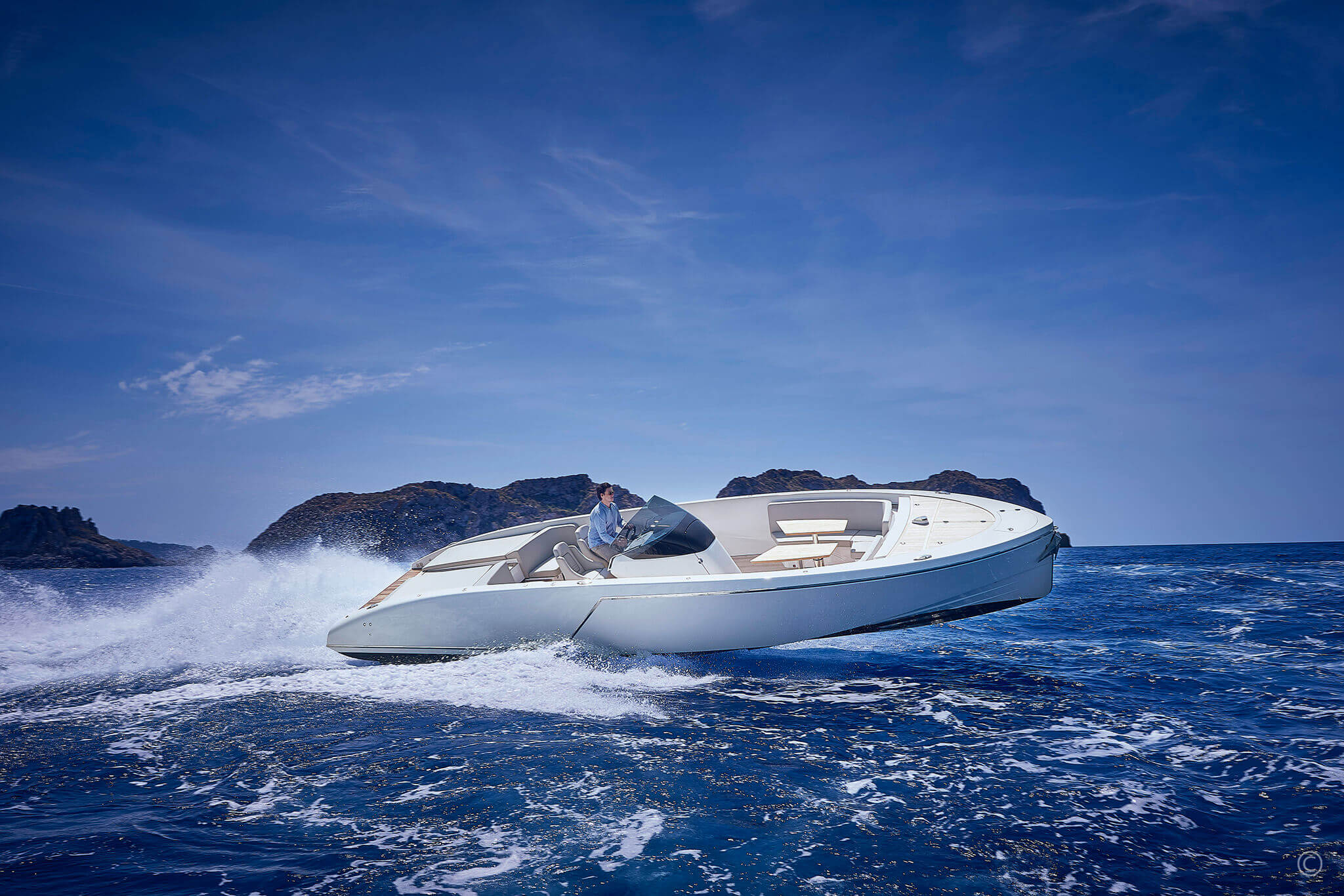 Posted at 18:52h in Non classifié(e) by bluewebadmin

Six years after the launch of the Frauscher 1017 Lido, the exclusive Frauscher shipyard launches the second generation of the open 10 meter yacht, the 1017 GT Air. The Air version of the highly functional day cruiser offers the first-class handling characteristics of its predecessor, supplemented by even more spaciousness and a modernised design. For all Frauscher models the designation “Air” stands for optimized space conditions on board, realized by a free-standing centre helm. Thus the Frauscher 1017 GT Air follows the 747 Mirage Air launched in 2014 and the Frauscher 858 Fantom Air launched in Cannes in 2018. An extended sitting area in the bow, retractable tables made of high-quality teak and a fully-equipped WC-bath in the interior underscore the high functionality of the day cruiser – as does the 12″ Raymarine Axiom Pro navigation display in the redesigned cockpit. Equipped with two generous refrigerated drawers and an optional high-quality, 14-speaker sound system, the Frauscher 1017 GT Air promises unlimited and comfortable boating pleasure on any body of water.

Michael Frauscher explains the design of the motor yacht: “In developing the 1017 GT Air, we were primarily concerned with improving the feeling of space on board: The centre helm, the extended benches and innovative storage space solutions create a completely new feeling of freedom of movement over a length of 10 metres. Another priority was dynamisation of the design language. In this regard we succeeded perfectly with the spherical windshield and the impressive ambient lighting.” Equipped with 2 diesel or petrol engines with up to 860 hp, the Frauscher 1017 GT Air is currently the largest Air model of the traditional Austrian shipyard. It replaces the Frauscher 1017 Lido in the model range and can be ordered effective immediately. The Frauscher 1017 GT Air will celebrate its world premiere from 19 to 27 January at boot 2019 in Düsseldorf. Trade fair visitors are cordially invited to have a look at the latest Frauscher innovation with all its details at booth 6A05. Starting in March 2019 the first test voyages can be arranged in the shipyard’s own test centre at Port Adriano / Mallorca.